Why Veterans Should Consider an Online MBA Degree 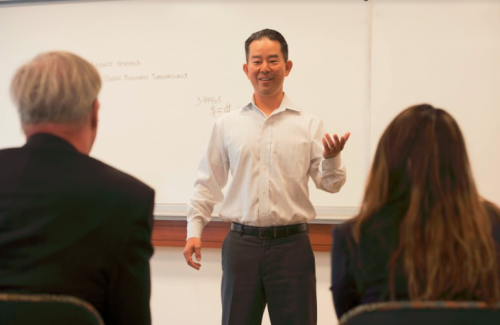 For many veterans, the next step after leaving the military is pursuing higher education. Of the many programs available, a Master of Business Administration can be an excellent fit for service members re-entering civilian life.

Most business schools are on the lookout for candidates who possess certain qualities. Among some of the most sought-after traits are an ability to lead by example as well as through motivation; a willingness to work as a team; and cultural awareness. Most veterans have developed these qualities throughout their service, making them excellent choices for admissions committees, U.S. News & World Report pointed out.

Business schools have taken note of the many desirable traits veterans have that make them good candidates for an MBA program. Here are a few things veterans thinking about applying to business school should consider:

There are scholarships available

One well-known perk of joining the military is the education assistance offered to veterans. According to the Department of Veterans Affairs, 700,000 veterans utilized education benefits offered by the VA in 2016. However, this isn’t the only form of financial aid veterans have access to.

The Yellow Ribbon Program is a national program that institutions of higher education can partner with. Northeastern University is one institution that is dedicated to offering the Yellow Ribbon Program to veterans. It’s available to Post-9/11 veterans, and works in tandem with the GI Bill® benefits. Northeastern University will match all funds provided to the student by the VA to pursue their degree.

Business school can ease the transition

The transition from military life to civilian life can be a challenge. However, numerous veterans have found that buffering their re-entry with business school is a helpful way to ease the transition, BusinessBecause wrote.

One reason for this is the parallel between tough decisions soldiers need to make in the military and the challenges that entrepreneurship presents, explained Jason Perocho, a Navy pilot who enrolled in business school after his service.

“All pilots are trained to handle catastrophic failures through emergency procedures, in order to keep you alive,” Perocho said, according to BusinessBecause. “Operating in this kind of dynamic environment truly prepares you for the entrepreneur’s life.”

While enrolling in an online MBA program can be a useful tool for transitioning between military and civilian life, there are some cultural differences veterans will notice once they start networking and begin their coursework. Writing on MBA application consultant Stacy Blackman’s blog, veteran and MBA grad Peter Sukits explained the new frame of mind veterans must adopt.

In the military, Sukits writes, soldiers are rarely self-centered. Everything done is done for the team; soldiers eat when their team eats, and they work when their team works. And no one brags about their individual accomplishments or their skills – humility is the norm, and nothing is about a single person.

In contrast, students in business school must learn to sell themselves. While you’ll need to collaborate on certain projects (and veterans may find they excel at this aspect), one of the major points students should get out of their MBA experience is personal growth. This is an opportunity to focus on the self and individual growth. In fact, promoting your personal goals and highlighting your individual contributions to a class or a project are key to success in business school, Sukits pointed out.

This can be a challenging new view to adopt. After years of learning that team-promotion should come before self-promotion, soldiers will need to completely alter their mindset.

Another element that some veterans find challenging is the application essay. It’s important to relay your personal experience in the paper to demonstrate to the admissions committee why you’re a good fit for their program. However, finding the words to describe your true experience can be tough, especially when writing to a civilian audience, Stacy Blackman wrote in an article for U.S. News & World Report.

“Language and terms from the military are often hard to translate into civilian terms, making it hard to communicate what you accomplished and why it matters,” Ben Faw, an Army combat veteran from West Point and MBA grad, told Blackman. “With limited experience in telling their stories to the civilian world, sometimes a veteran will have trouble clearly and succinctly explaining their own personal story.”

This is a challenge veterans can overcome, though. To help make sure your essay accurately conveys your story and the importance of it, reach out to a civilian friend, family member or advisor. Ask them to read the essay and provide feedback.

It’s no secret that earning your MBA through a program like the one offered at Northeastern University’s D’Amore-McKim School of Business has the potential to accelerate a person’s salary growth. For veterans, this benefit may be even higher than the average student, though. A veteran with a recently earned MBA can make, on average, $109,720. By comparison, the average non-military MBA grad makes an average of $92,360 per year, Military.com reported. Upon graduating from business school, veterans will have a leg up on their classmates with no military experience, which can help further their success in the business world.

Business school isn’t a requirement to start a company, but earning an MBA can help entrepreneurs start out on the right track and keep their companies growing. As such, anyone who wants to pursue entrepreneurship may find earning their MBA to be a valuable investment.

Many veterans find that opening their own businesses is a career path that suits them well. Some of the most recognizable brands were founded by veterans, Veterans United pointed out. FedEx, for example, was started by Frederick Smith after he served four years in the Marine Corps; Nike was co-founded by Army veteran Phil Knight; and Paul Sperry, who was in the Navy Reserve, created the world’s first boat shoe and went on to found Sperry Shoes.

According to a 2017 report from the Small Business Administration, about 10 percent of all small businesses that responded to the organization’s survey were veteran-owned. Veterans have experience with leadership, quick decision-making and management – all ideal for leading a company to success. But earning an MBA prior to starting a business can help veterans learn about things like finances, marketing and networking; these are also highly important to business ownership.

Veterans leaving the military and entering civilian life have many options for what sorts of career paths and lifestyles they want to pursue. For many, business school feels like a natural fit and helps prepare them for working in the business world or starting their own companies. To learn more about applying to Northeastern University as a veteran, reach out to an enrollment advisor.

GI Bill® is a registered trademark of the U.S. Department of Veterans Affairs (VA). More information about education benefits offered by VA is available at the official U.S. government website at http://www.benefits.va.gov/gibill.

6 Things You Can Learn While Getting an MBA

Starting a Business in Late Career: How an MBA May Help

Military MBA Applicants – It’s Not About You Until Now

Defining entrepreneurship, types of entrepreneurship and outlining skills you need to be a successfu Read More about MBA Technology Management: Salary and Roles to Pursue

Defining entrepreneurship, types of entrepreneurship and outlining skills you need to be a successfu Read More about Online MBA – International Management: What Makes It Different

How to Become a CMO: Education, Skills, and Other Employment Requirements

The C-suite is one of the most important levels of any organization. It’s composed of senior execu Read More about How to Become a CMO: Education, Skills, and Other Employment Requirements