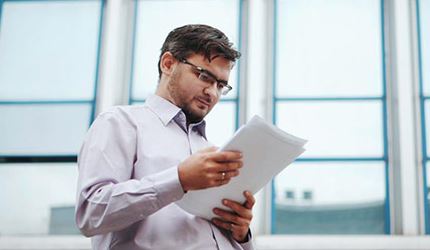 The minute details of the U.S. tax code are subject to regular revisions, but it takes an act of Congress to pass sweeping measures related to these laws. Tax reform is and has been a major component of political party and candidate platforms for seemingly every election. Aspiring tax professionals attending the Master of Science in Taxation online program from Northeastern University’s D’Amore-McKim School of Business can gain the knowledge and skills necessary to stay abreast of these revisions and their impact.

President Donald Trump was elected as the first Republican in the Oval Office in eight years, and he campaigned as an adamant tax reformist. In line with the platform of the Republican Party in general, President Trump strongly advocated for a tax overhaul that would broadly reduce what Americans would owe, particularly business owners. On September 27, President Trump and the party’s majority leaders in Congress unveiled what The New York Times and others have called the most expansive set of changes to the U.S. tax code in decades.

Headlines of the new plan

As of the beginning of November, the proposed tax bill continues to wind its way through the House of Representatives and the Senate, with Republican leaders hoping to fast-track the legislation for completion by the end of 2017. As it stands, here are the most significant proposals of the plan:

● A corporate tax rate of 20 percent, down from 35 percent.
● A 25 percent tax rate for “pass-through” businesses, which include arrangements like sole proprietorships and partnerships where all income is currently taxed as personal income.
● The option for corporations with overseas tax arrangements to repatriate their income and pay a lower, one-time rate.

● Shifting to three separate income tax brackets rather than seven, with the possibility of a fourth, higher-rate bracket.
● The bottom income bracket would carry a rate of 12 percent, up from 10 percent. The middle and top brackets would be lowered to 25 percent and 35 percent, respectively. Exact income thresholds for these new brackets have not yet been specified.
● The standard deduction on taxable personal income would nearly double—the initial outline proposed a $12,000 deduction for single filers and $24,000 for married couples. However, the plan proposes the elimination of most itemized deductions.
● New rules for the child tax credit would make the first $1,000 refundable, and increase the income level at which the credit would phase out.
● The estate tax on inherited assets totaling more than $5.49 million would be eliminated, per the proposal.

The final contents of the tax overhaul plan are subject to change significantly as lawmakers write, revise and debate it, and there are still many more details that are unclear at this time. Using the initial proposal as a guide, tax experts and economists have released several projections on how these proposals would shake out if they were actually implemented.

Effects of the plan

According to analysis of the proposed tax changes from the Tax Policy Center, the tax plan would reduce federal revenue by an estimated $6.2 trillion between 2016 and 2026, without adjusting for any “macroeconomic feedback effects.” The majority of this lost revenue would come as a result of lower tax rates charged to businesses. This figure would amount to around 2.6 percent of U.S. gross domestic product. Due to the effect of interest rates, the impact of the proposed tax cuts on the federal debt would be even larger—the total deficit would grow to around $7.2 trillion by 2026 unless the tax cuts were offset by spending reductions.

These estimates present the clearest obstacle to President Trump and his Republican Party if they hope to pass the bill as proposed. Within the GOP are a number of so-called “deficit hawks” who are principally against any measures that raise the federal debt and balk at the suggestion of increasing it as much as this plan probably would. With their slight majorities in both the House and the Senate, Republicans only have a small margin of tolerance in passing the bill, assuming every member of the opposing Democratic Party rejects it.

In terms of the impact on personal taxes, the Tax Policy Center’s analysis estimated that the plan would reduce the average household’s annual tax bill but could increase the amount owed by a few. Households of any income would see tax breaks of $2,940 on average, or 4.1 percent less than what they pay now. However, filers in the highest income brackets would see larger tax reductions as a percentage of their income—the top 1 percent of taxpayers would increase their after-tax income by around 13.5 percent. By 2025, average tax cuts would amount to more than $4,000 without adjusting for inflation.

Should these proposed tax measures be signed into law, they could have broad and substantial effects on the American economy. The Trump administration and Republican Party policy leaders supporting the plan have said that although the tax cuts would reduce federal revenues, the U.S. would still enjoy a net benefit from stimulated business spending, investment, hiring and greater consumer confidence. As expected, tax and economic experts remain uncertain on exactly how these tax changes would impact the economy.

In collaboration with the Penn Wharton Budget Model, the Tax Policy Center presented what it termed “dynamic estimates” for the projected economic impact of the new tax overhaul proposal. The report’s authors are quick to caution that like any projections, these estimates come with a high degree of uncertainty, but serve as a useful benchmark in understanding the anticipated impact of such sweeping tax code changes.

In brief, the Tax Policy Center found that the Trump tax proposal would have the following broad economic effects:

● Aggregate demand and total economic output would increase. With higher after-tax income, households would most likely spend more money and businesses would increase investment. This could increase total GDP by as much as 2.3 percent in 2018 before actions by the Federal Reserve (including higher interest rates) serve to tamp down output.
● Saving and investment by U.S. households as well as corporations would likely increase as well due to higher post-tax income levels.
● The impact on the labor market could swing in either direction. The Tax Policy Center noted that according to the current body of research, one could argue that lower taxes both increase the incentive to work by increasing take-home pay, but also decrease the incentive to work more since there would be a lower ceiling for minimum income needs. At first, lower taxes also tend to increase hiring by businesses, but this effect subsides over time.
● The long-term effects of the tax cuts on GDP and net federal revenue might be much different than the near-term impacts. The Tax Policy Center models estimate that while GDP would initially rise, by 2026 it would post a yearly decline of 0.5 percent and a larger annual drop of 4 percent in 2036. This is because relative incentives to spend and invest more would probably decrease over time due to a number of factors. In the end, that means the tax overhaul would still have a significant impact on federal revenue and the national budget deficit over the next 20 years.