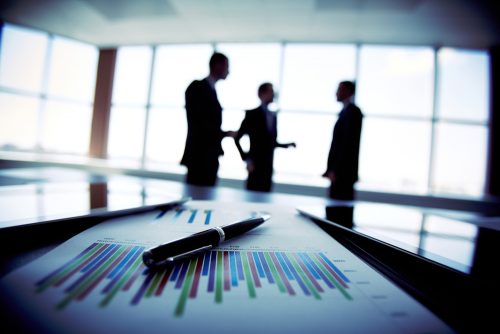 The stock market has been on a remarkable rally as of late. In addition to stocks being in bullish territory for eight straight years, the Dow Jones Industrial Average broke the 21,000-point threshold earlier this year, an unheard of feat once thought impossible. The Standard & Poor’s 500 has made wavelengths as well, up approximately 14 percent since November and adding $14 trillion in earnings since 2009, according to The Wall Street Journal. Even on a quarterly basis, the Dow Jones is firing on all cylinders, compiling 4,400 points in the previous six quarters, according to MarketWatch.

These observances, along with other signs of strength – such as consumer confidence and positive sentiment in the housing sector – has led to a wave of optimism, noted J.J. Kinahan, chief market strategist for TD Ameritrade, an investment firm whose corporate headquarters are based in Omaha, Nebraska.

“People went toe in the water, knee in the water and now many are probably above the waist for the first time,” Kinahan told the Journal.

Indeed, in April of last year, just 52 percent of Americans owned stock, according to a Gallup survey. At the time, that was the lowest rate in the 19-year history that the polling outfit has kept track of this statistic. Some economists believe that given the strides the stock market has made, investor participation may reach or surpass 65 percent, a share last observed in 2007, according to Gallup’s analysis.

But both economists and successful investors alike are advising consumers not to get ahead of themselves, as the stock market is fraught with risk if precautions aren’t taken.

Someone who shares this sentiment is Seth Klarman, a value investor who manages Baupost Group, an investment services firm based in Boston. In a letter obtained by the New York Times, the 59-year-old wrote that the reduced regulatory environment–which has fueled the stock market’s surge–is not without its potential pitfalls.

“Exuberant investors have focused on the potential benefits of stimulative tax cuts, while mostly ignoring the risks from America-first protectionism and the erection of new trade barriers,” Klarman said. “President Trump may be able to temporarily hold off the sweep of automation and globalization by cajoling companies to keep jobs at home, but bolstering inefficient and uncompetitive enterprises is likely to only temporarily stave off market forces.”

Klarman isn’t alone in his skepticism. Seventy-two-year-old retiree Peter Gallavin of Grand Rapids, Michigan, told the Journal that there’s no question the stock market is on a tear, but it’s only a matter of time before the bears emerge from their slumber.

“I’ve been investing in the market for long enough to know that sooner or later after it comes up, it’s going to go down but when that may or may not happen none of us know,” Gallavin said.

When stocks reached their eighth consecutive year of being in bull market territory, several major news organizations released details on what signs emerge when a bear market may be just around the corner. Though there are several indicators – such as higher borrowing costs and rising inflation – one of the more common signs is when optimism runs rampant. By several measurement sticks, this optimism overload is currently in place.

For example, on a monthly basis, government sponsored enterprise Fannie Mae releases survey data related to how consumers feel about the housing market. In February, the sentiment reached 88.3 on Fannie Mae’s Purchase Sentiment Index. Up nearly 6 percentage points on a year-over-year basis, that is the highest measure in the survey’s history.

Consumer attitudes in general regarding the national economy have also surged. The Conference Board’s Consumer Confidence Index in March topped 125, up 10 points from February. Not since 2000 has the measure been so high.

These extremes may be contributing to the increasing levels of pessimism found among individual investors. According to the American Association of Individual Investors, just 30 percent of respondents in early March believed stock prices would continue to rise in the next six months. That’s eight points lower than the survey done a week earlier, and the lowest percentage recorded in a decade. As to why investors are increasingly pessimistic, responses included the market being “way overdue for a correction” and valuations “becoming too rich.”

“Given the fact that valuations are at the very high end of normal and on the edge of expensive, there’s still room for people to change their mind about the market,” Manley warned.

Just as investors and financial experts are advising cautious optimism regarding the stock market’s run and whether or not a course correction is in the offing, they’re also advising investors not to reinvent the wheel should they decide to invest in stocks. Nicole Boyson, an associate professor of finance at the D’Amore-McKim School of Business at Northeastern University, told Yahoo Finance that individuals who are new to investing should stick with the basics and avoid strategies that are overly sophisticated, like day trading.

“Day trading is a bad idea for everyone,” Boyson advised. “It’s costly in terms of both trading costs and taxes, and it has nothing to do with fundamental research.”

Ultimately, investors are enjoying the ride while it lasts, but are resigned to the fact that a course correction is bound to happen eventually. Diversifying one’s portfolio is the best way to weather the approaching storm.

“Small investors really need to just focus on the long-term,” said Matthew Schwartz, financial advisor for New Jersey-based financial services firm International Planning Alliance, in an interview with U.S. News and World Report. “If you are still in the accumulation phase, basic diversification strategies ought to be enough to dampen the worst effects of a normal business cycle.”